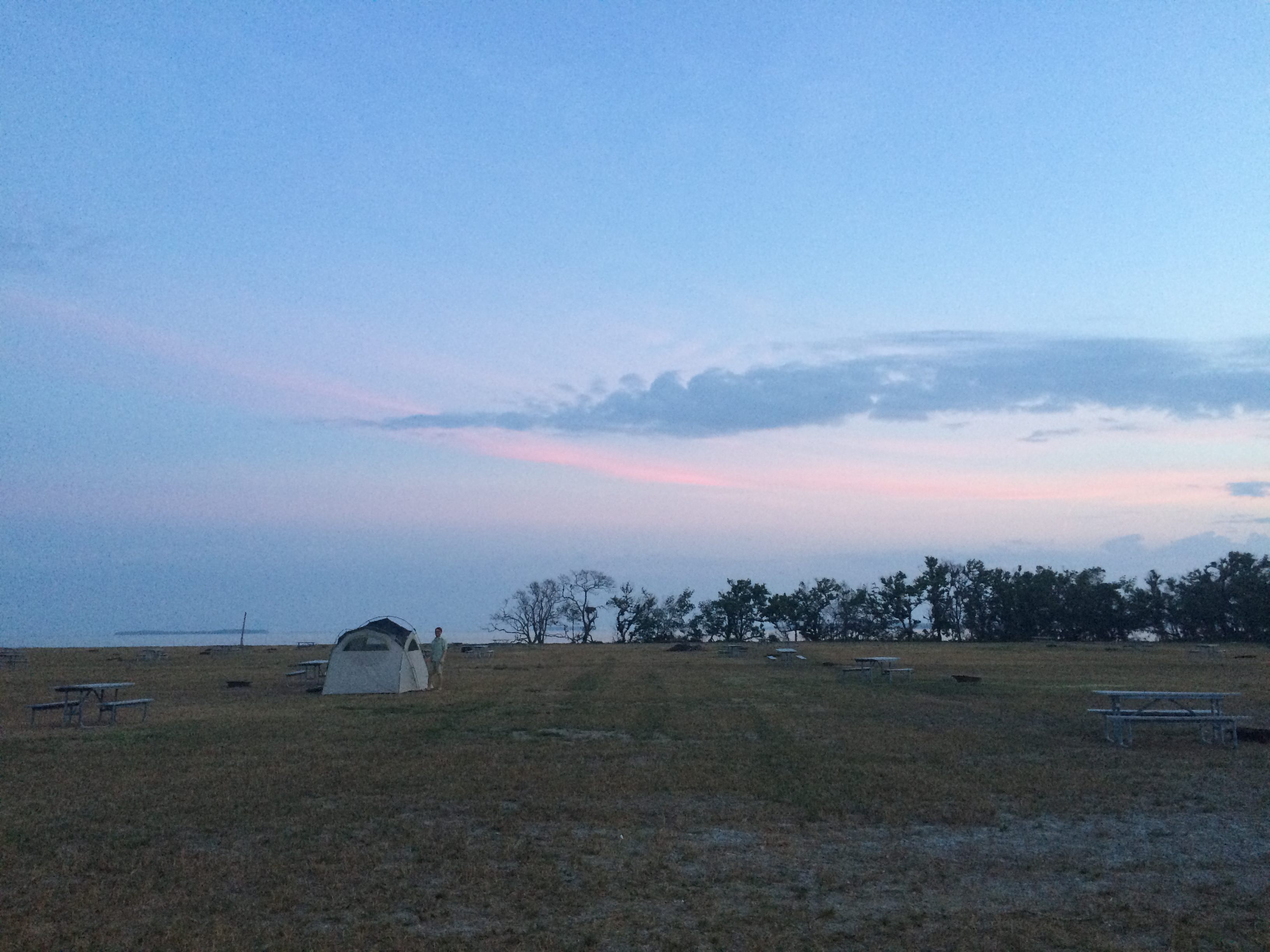 We decided that on our last night in the National Park, we'd try something a little different. Camping on FL Bay, in the peaceful, empty Flamingo Campground. You see, it was Spring Break in southern Fl, and the weekend, so Long Pine Key was CROWDED. After day trips to Miami and Key West, we were pretty darn sick of people. We decided a night of solitude was the way to go. We drove down to Flamingo and were immediately taken in by its beauty, by the gentle, salty breeze, by the Osprey nest only feet from where we slept. We took a quarter mile walk to the marina and watched a family of manatees feed on the seagrass. As we set up camp and the sun gloriously set over the water, we wondered why only one other group took advantage of this bayside camping. And then... well then it got dark. And the spiders came out. Their glowing eyes flashed when they caught the light of our headlamps. There were thousands of them... THOUSANDS! They call the Everglades a sea of grass. No, no. This was a sea of spiders. Huge, glowing spiders. Suffice to say, I am my mother's daughter, and while I respect and appreciate all life, I was immensely creeped out by all the giant spiders, that were, well, everywhere. *Shudders*. Brandon had to give me a piggyback ride across the spider sea to our tent, so I wouldn't be nervous about them crawling up my legs. And then, once I was tucked safely in the tent, and had managed to (mostly) push the thought of these spiders from my mind and fall asleep, Brandon woke with some sort of sixth sense prickling. We hadn't put the tarp over our tent, leaving the screened ceiling open, because when we had originally gone to sleep it was 80 and humid, with a clear sky and again... I wasn't fond of the idea of standing in the spider sea to secure it. Brandon jumped up, secured the tarp over the tent, and within seconds (seriously, I am not exaggerating here) it began to pour. And then it began to thunderstorm. Far away at first, then closer, closer... we woke up to the flashes of lightning and rumble of thunder. We considered escaping to the car (which would require passing the spider sea, lest you forget) then the storm swung back in the original direction, far enough away that the tent was safe, before swinging close-ish again. It felt like a game. Never close enough to be truly scary. But never far away enough to be... not scary. At any moment, we thought, we'd have to flee our tent. Meanwhile, the rain whipped our tent loudly enough that it sounded like it'd rip any second, or float away with us in it. Brandon, once again, went outside and secured the tent with more stakes, but it took a while to re fall asleep with that harsh sound. So... not as peaceful as it looked. I'm just glad we only stayed a night.